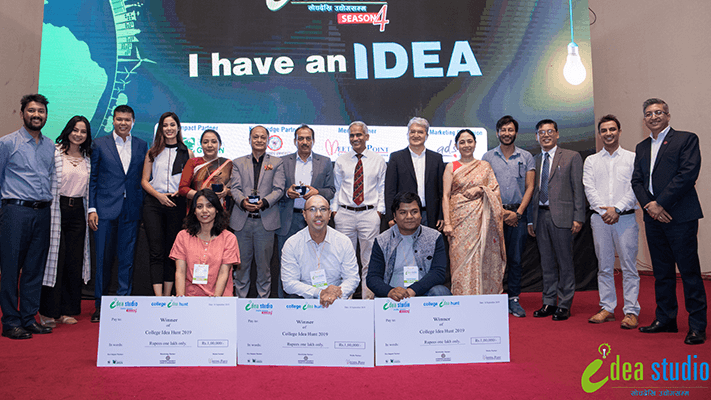 College Idea Hunt 2019 was introduced to enable the college students towards entrepreneurship. College Idea Hunt is a preliminary round event of the grand event I Have an Idea 2019. Both the events are preliminary rounds of Idea Studio Season 4. The prep began with college activation through presentation in more than 100 colleges located in Kathmandu Valley. The details included an introduction of program, the process, benefits, eligibility, evaluation criteria, prizes, and the submission of ideas (contact information) et cetera. This time green entrepreneurship was introduced to the students and were encouraged to submit ideas related to that. More than 1,800 students of varied faculties were reached. More than 100 ideas were submitted and shortlisting was in two phases. Sixty ideas were shortlisted first. They submitted two minutes videos as part of shortlisting. Total 10 ideas were selected for the I Have An Idea 2019 event. The ideas ranged from green business to social enterprise to service to technology. Experts groomed these Top 10 ideas for the final event with five days incubation at Idea Studio Nepal office. Along with the award money, Top 3 winners got direct entry in the month-long incubation, an opportunity to pitch their ideas in the national television show Idea Studio Season 4 and unconditional support of Idea Studio Nepal.